OK, that title is not an endorsement of the Donald. I just want you to put a pause on your binging on all primaries-related things to consider the following proposition:

That The award for most revolutionary candidate in the  2016 Presidential Primaries  goes to…the Donald.

Now, settle down; I have a few goodies for you to munch on.

But first, he receives the award for clearly beating Sanders at portraying  a presidential candidate who shakes and threatens  the elite’s political order, and instills fear and dread in their hearts.

So credible is his performance that he has garnered the oligarchs’ hate, who are conspiring to illegally derail his candidacy. Sanders’ performance, on the other hand,  has been praised and encouraged by them. He hasn’t even been accused of being  a ‘red threat’ or a ‘communist’, despite his ‘socialist’ trappings.

The character Trump has been playing in the primaries  is that of an anti-globalist. Sanders has been relegated to supporting actor attacking the democratic party’s  ‘establishment’.

Donald’s “Mexican wall”, which, of course, “they are going to pay for it“, is a pain in the globalists’ derriere, not because they are not racists, but because it is an obstacle to their privilege to access global cheap labor, whether in Mexico or China.

The mere act of voicing a challenge to that privilege converts that person in the enemy of the globalists and of their representatives in Congress and the White House.

Then, by being the ONLY one in these primaries challenging the globalists and becoming their enemy, the Donald becomes the true radical. Further, I argue that his appeal to some minorities and the working class has to do with them understanding, at least at a subconscious level, why he is being attacked by the ‘establishment’.

Of course, in politics, as in life, to be a radical is not necessarily a good thing. Trump’s ideological (apparent) anti-globalism is soaked in racism too. Based on his comments, he seems to be a paleoconservative, anti-interventionist, and nationalist; words as scary to the elite as the words ‘zika virus’ are to a pregnant woman. That’s why you seldom see those words used in the MSM.

But paleo/conservatism is not good for the working class either. It’s a complicated existence, people. Trump’s ‘radicalism’ belongs to the class of small(er) business  owners. That’s not a crime. The working class shares interests with them and the same enemy: the globalists.

So, what about Sanders?

SANDERS  ORWELLIAN DEFENSE OF THE OLIGARCHY

Sanders is NOT  an anti-globalist.

Words are important, and Sanders has been very careful with them; and if he can’t handle the words, he just evade the topic. Case in point, you won’t find any reference at his website to globalism, nor to foreign policy. Funny thing, the Donald addresses the issue, but not the ‘socialist’ candidate.

But you could get a sense of his position from these few carefully crafted sentences:

“Nobody I know believes we should place a wall around this country. Trade is a good thing, …

Globalism is safe in Sanders’ hands is what that means.

…our overall trade policy must also change for corporations to start investing in America and creating jobs here again, and not just in China and other low wage countries.”

This is the thing: a ‘socialist revolutionary’ would have the political understanding that globalism is the wooden stake through the heart, not only of national interests, but of international working class solidarity.  There is no “fair trade” when workers are pitted against each other for crumbs. You can’t have “fair trade” if foreign policy is based on militaristic defense of the interests of global corporations, which is what these wars are about: protecting their markets and cheap labor. Globalism and its ideology has to be stopped.

Everything is interconnected. Sanders refusal to talk about his foreign policy plans indicates he is hiding it; it’s no out of  ignorance.

Sanders has been very careful not to condemn the entire class of oligarchs. He has persistently called the attention to the “tiny one tenth of one percent” of it. It matters not only because it is a matter of perception, but because he is the ‘socialist’ who should be using his campaign to educate the youngsters about what the elite doesn’t want them to learn: the reality of  class wars.

Sanders has achieved the dubious honor of bringing the progressives to the point of giving up fighting the oligarchy altogether when he focuses their attention to fighting against the “tiny .1% of 1%” in Wall Street.

That is Orwellian, folks. Our “only” enemy is that tiny % of  “the billionaire class”, the “greediest elements of that class”. No mention to other sectors who are part of the elite: the owners of the media, Monsanto, military corporations, surveillance and digital/software kings…How do you measure the “greediest” element?  Can we solve our problems with the oligarchs by eliminating the few “greediest” men in that class?

It’s not a class war when only a few are portrayed as the  offenders, when it is reduced to a moral issue, i.e., “the greediest elements”.

The working class has been blinded, its identity as working class has been distorted. It has been reduced to the category of an “angry” component of global capitalism which the globalists need to appease. Obama and now Sanders have thrown a tarp over the oligarchs to hide them from the ire of the victim of their globalism.

Trump is not the answer, mainly because no one knows what the hell is below that puff of yellow hair. Sanders is not it either because he is another Obama in disguise.

As for Hillary, we know what she stands for, whether you like her or not. She has never campaigned as the big white hope or revolutionary. Obama defeated her by dangling the carrot of “hope and change”. See where that took the working class, national and international. Now we have Sanders dangling the same carrot, this time one dyed red.

Hillary has a history of TRYING to help when she was First Lady: in favor of Palestinians, and trying a better health system, better than Obamacare. She has been paying dearly for taking a stand for the Palestinians; it is one of the reasons why the media vilifies her, but not the ‘commie’.  You should ask yourselves why the MSM attacks her and not him. (Pss, it’s not because she is “a liar” or “immoral”. The MSM and the GOP don’t care for that.) Sanders, well, in my post you can see how he defends the Zionists.

You can deal with reality, not with utopias.

I recommend this article for those interested in a deeper analysis of Sanders’ campaign.

Posts where I discuss these candidates and the levels of comfort they represent to the oligarchs.

PS: Being anti-Zionist does not equal being anti-Jewish.

The Evolution of the Fight Against the Capitalist Class: From All of Them to Against 0.1% of Them

From about the beginning of the industrial revolution, the working class have fought against the capitalist class, against all of it. Then, from the middle of the 20th century up to 2010, and as evidence of their loss of political power,  ‘we the people’ was waging a battle against  a ‘mere’  10% of that class.

Then, in 2011 came the new wave of leftist progressivism in the form of the OWS movement: their fight was reduced to against a bare 1% of the capitalist class. 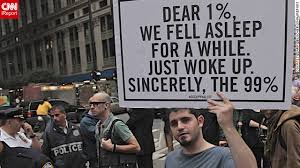 Now comes ‘socialist’ Sanders, who has decided that the youngsters should fight against ONLY the 0.1% of the capitalists, and that said class should be known from now on as the ‘billionaire class’, not the capitalist class. Also, a vote for him is a vote “for yourselves” or for the “working family“, not for the working class.

In other words, the last vestiges of the socialist ideology of class identity (capitalist or working class) is finally gone in the new millennium with Sanders’ new brand of ‘socialism’.

Sanders revisionist formulation of who is the enemy of the working class (only the 0.1% of the billionaires), is not based on ignorance or omission, not even on ‘tactic’ to bring the voters into his ‘movement’.

He has almost exclusively identified as the evil class only a portion of Wall Street, “the greediest” elements in it. He seldom mentions any other elements of the capitalist class: the war mongering armament corporations (he has even used police force to defend them from protesters), the surveillance corps, not the globalist health insurance corporations…Only WS is our enemy, per socialist Sanders. His agenda for reforming WS, shall he become president of the USA, reflects clearly his true class alliance.

It’s not to the one  you think.

Those in the top 95-99% are part of the ‘greedy’ capitalists too: big money/blood sucking owners of globalist corporations are there. But Sanders don’t want you to look there. Just focus on the .1% of that 1%.

The many ‘reforms’ on Wall Street advocated by Sanders and the other protectors of capitalism will be sooo successful that, by the end of the next 20 years, there won’t be any percent to fight against. WS will be made whole and the capitalist class will chant ‘mission accomplished: our rule is unchallenged.’ We will be fighting against each other, cannibalizing each other for the few permanent jobs and other crumbs from the victorious elite. It’s Ayn Rand’s dream come true.

This is not a call for revolution or for class struggle or class war: it’s the working class losing its identity and becoming mere consumers, begging protection from its oppressors.