That’s the closer we can come to a real revolution: both parties are terrified of the angry voters, terrified that the voters will swamp their respective conventions and walk out with each party’s owners head in  a pitch fork. Wall Street, and Loyd Blankfein in particular, is keeping it quiet, but they too are nervous, not of Sanders, silly. Of the angry youngsters who want his head in a pitchfork. Sanders has never been a threat to the oligarchs or WS: he is their friend, he bailed them out.

Since 9/11, when the oligarchs ditched any pretense of not being the power behind our government, the people’s anger have been boiling. Bush Jr. showed publicly who his ‘base’ was: the ‘big donors’. The duopoly then channeled that voters’ anger on to the 2008 elections through a charismatic leader, Obama, who brought them, progressives and  republicans included, to the democratic party, and neuter them there. The financial sector openly backed him up and then were there with Obama  in the White House, in the open running the USA Inc. Under Obama’s seven years rule we saw the anti-war movement shrink like a raisin, the same with the OWS movement. The BLM movement is still struggling to survive. 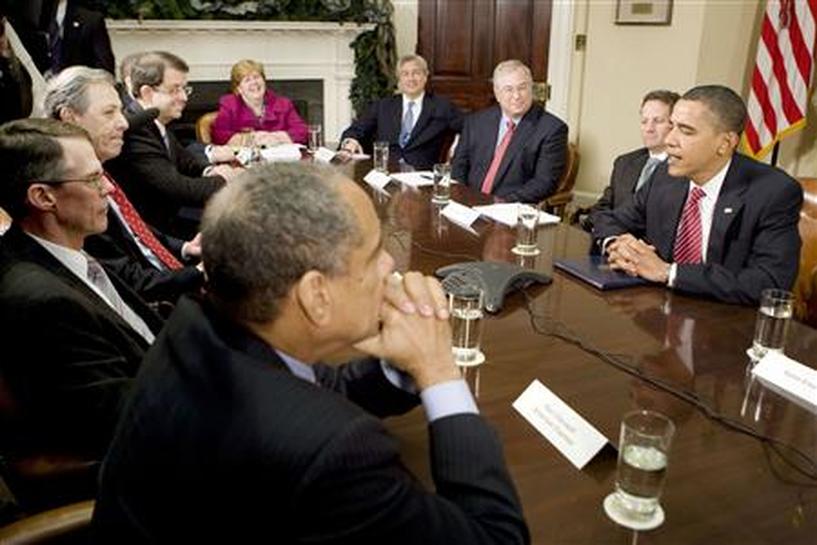 2009 Infamous Obama meeting at the White House with Financial elite. They went to tell him   to tone down his attacks on them…and he dutifully complied.

Fast forward to 2016 elections. The nation’s middle class, running on fumes,  is seriously p.o.’d, the distress is general. So, the duopoly goes to work again and offers two ‘charismatic’ leaders to channel the anger, again, and render it non-threatening. But this time there is no Obama to unite republicans, democrats, independents and dreamy leftists in one party and neuter them there. Thus, the anger resurfaces and  challenges the ‘establishment’, but it is circumscribed to inside the two parties.

Hillary Clinton (HC) has to be  sacrificed, again, fed to the angry mob to keep them away from the masters. She is, again, demonized as the sole cause of all the problems of the nation and the world; the problem is not the oligarchs who buy and put barriers on our path. The problem is she, their whore, let’s go get HER, forget about Blankfein and WS and Sillicon Valley’s Tech Giants…it’s she we need to destroy.  If there is a new scandal of any sorts, you bet she is behind it, and we can’t let a woman like that run our nation…The anger is being safely deposited on her.

But the oligarchs’ two alternatives, the two ‘charismatic’ men – Trump and Sanders, are so dysfunctional and ineffective that all that attack on Hillary only serves to make her the only sane alternative to the voters of both parties. She will win against the best wishes of the oligarchs. They gave Sanders a yuuge chance, they gave him, as they are doing with Trump, free press and non vetting his record. But the man is soo insufferable and incompetent that he can’t win. Every time he went on an interview, he screwed up. The NY Daily News interview…it was an opportunity to put Hillary away. But noooo! He squandered the opportunity.

Guess which one screwed up the most?

Speaking of Trump, whom the GOP thought they could let him run in their party to entertain and distract their voters, like Sanders, he ran away with the angry voters, and with them next to him, put himself in the position of power  to challenge the party into supporting him, threatening to unleash that mass of angry voters. The people are being manipulated, once again. Trump spoke the words that the elite hates and never expected him to mention: insularism, nationalism and anti-globalism, and now they want him out.

The elite and the oligarchs are as confused as the left is. They will have to decide fast: Trump or Hillary. I discussed the reasons why they hate Hillary. So, who will it be? I think they fear the feminist, powerful woman the most.

So, Sanders and Trump have taken that anger and used it for their personal benefits. Nothing positive is going to come from those two men’s  breve 15 minutes in the spotlight, nothing positive for the working, middle and poor classes. There will be no discussion about what happened in these primaries, what mistakes were made, simply because there was no organization behind the ‘movement’; it was all Bernie’s movement. There was no party behind him, no coordinating groups –only the campaign managers who made a pretty penny on account of the naive youngsters who gave their little $27.

The energy of a huge mass of angry and discontented middle class, republican and democrats and independents and leftists…is being wasted on attacking one woman. It’s like Jeffrey St. Clair said at Counter punch:

All that energy was for naught. No need to talk about Trump’s campaign, there can be not one leftists out there who thinks that Trump’s ‘movement’ ever had the promise of growing into something important for the GOP’s voters that could be taken as an alternative to Hillary.

Sanders’ followers will continue obsessed with Hillary, they will follow her through her campaign for the presidency against Trump like a rabid dog accusing her of all types of unnatural acts against humanity, and bonding with him when he calls her names. Sanders followers always go into a state of ecstasy when Sanders of Trump call her names. They will waste their energy in trying to derail her campaign thinking that if she fails to win against Trump, by some miracle the nation will move forward, there will be no more wars…because she is the ‘corrupter’.

Even worse, they are getting ready to spend their energy, should Hillary wins the presidency, on attacking her every step of the way. Wasted energy and a wasted ‘revolution’. Instead of recouping to form a viable third-party, organize the unions,  unite wtih those working to form an international workers organization to fight the globalists, they will continue to burn themselves out trashing one woman.

Obama’s term is coming to an end, and the left is disorganized and confused and unfocused. The transition from Obama to, hopefully Hillary and not Trump, will be depressing: coming out from two defeats is not  easy.

I don’t see any path to recoup that energy wasted on Sanders. It’s like I said when Obama ran in the 2008 primaries: the left falling for the ‘hope and change’ slogan of a charismatic establishment leader will only soil the image of the progressive movement. I said the same about Sanders, that supporting his vacuous ‘socialist revolution’ will only throw the real revolution backwards another 10 years, at least. It’s going to be harder to trust or believe any one who come out again selling utopias and easy-made disposable ‘revolutions’.

I guess we’ll continue fighting to reform the duopoly, which is like trying to reform somebody’s leg, other than yours,  against his or her will.