There has to be an explanation for why the MSM, and the financial elite they represent, has viciously attacked Hillary Clinton (HC) on both primaries (2008 and 2016). C’mon, in both instances they supported two long shots, first a Black man carrying a ‘socialist and anti-capitalist’ ‘baggage’, and now a self-proclaimed ‘revolutionary socialist’, Sanders. One has to be dead wood to not notice that today the MSM peels HC alive and totally gives a pass to Sanders. No one is stirring the socialist-communist bogey man against Sanders. Imagine if HC were to talk about socialism! She would be dead by now.

Don’t tell me the MSM skews her because she is ‘dishonest’; that would be an insult to YOUR own intelligence. The owners of the MSM are the pot calling the kettle black. And don’t deny that Sanders is being given a pass: look at all the news magazines online and count how many headlines include an offensive word against Sanders (none) or  fear mongering content about his socialist inclinations. Hillary Clinton is the bitch, the liar and ‘dishonest’ woman, more like a witch with a broom and cauldron. So, what gives?

They don’t hate her because she’s ‘dishonesty’ (anyone who believes the MSM is honest and ‘offended’ by her ‘lies’ is…naive); they hate her because she helped in the IMPEACHMENT of RICHARD NIXON. That’s it.;, well that’s one reason. That’s why they will not only block her presidential aspirations, they do it with gusto: dragging her through the mud.

That has been Hillary Clinton’s crime all along. They first tried to impeach her husband over a sexual affair as payback, but because they failed (Republicans), they want to  make sure she  will not be elected president of the USA.

You can look it up. Every right-wing magazine online talks about that, they can’t forget. And those who want Sanders to win join are joining the right wingers in the attacks on her. The woman can’t win: she’s equally attacked by right and left wings. But why by the left?

The American ‘left’ share something with the male oligarchy: misogyny.

The other reason for her unelectability: she’s a WOMAN, and a feminist one at it. If you think that Elizabeth Warren will be treated less brutally if she runs for the presidency, don’t bet on it. The US male oligarchy is not ready for a woman, least of all the kings of Wall Street and Silicon Valley (supporting Sanders for the moment being); and less ready for a woman who paraded herself with…gulp…feminists in international women’s rights conferences. The fact that Hillary is unapologetic about being a feminist doesn’t seat well with the male oligarchs that rule our lives.

And the ‘left’ have given all signs of misogyny when they accuse her of giving ‘priority’ to women and ‘identity politics’ over the sacrosanct (male) workers and working class.

The other reason why she is unelectable is that they rather elect a pseudo socialist who supports the Israelis (Zionists) than a women who does the same thing, but who showed her support to the Palestinians when she was  FLOTUS. It’s hard for the Israelis to forget those photos of Hillary embracing Palestinians. They have made her pay for it, and she learned the lesson. Except that they can’t trust she REALLY learned the lesson…and neither do I.

That’s my theory. You can dismiss it, but there is truth in there, it’s not totally ridiculous. But she will prevail despite the like-gang-attacks on her coming from the right and the left in unison. This was the ‘kiss of death’ for HC. It is the beginning of the Hillary bashing tradition. This photo was used to portray her as a lesbian in the MSM. Then-first lady Hillary Rodham Clinton (R) and kisses Suha Arafat, wife of the late Palestinian leader Yasser Arafat, November 11, 1999. (photo credit:REUTERS) 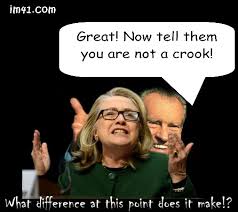 From the internet. The ghost of Nixon impeachment will follow her as long as she is in politics. They will never forgive her for that. That’s why her rivals are elected over her: better a pseudo socialist than her. It’s the establishment making the call, not you. You are just being manipulated, as usual.