There is an update to this post as a result of the presidential elections: “Sanders: I’m Willing to Work With Trump”.

Also, as I predicted somewhere else, the pseudo-left is now accusing him of being a ‘democratic right winger’. During the elections Sanders was a demi-god, but after he helped in the coup against the people of this nation, now he is ‘trash’. Can’t say I didn’t warn you.

Bernie is, for all practical purposes, gone: he lost.

And the (rightfully) angry millennials who raised him to Sage status and put the fear in Hillary’s and the DNC’s hearts, they lost with him.

At the end of his magical mystery  tour, Bernie leaves the millennials behind in the same condition in which he found them when he boarded them into his coach: disorganized, with no future and no movement.

Actually, he left them in worse situation, for now they are angrier and feeling betrayed by just about everybody. Theirs is a sense of not-belonging, of not being wanted, a sense of being alone born of a not-yet-matured sense of having been manipulated by politicians.

Sanders is 70+ years old and owns a fancy multi-million dollars home to retire to after the dust settles down. His millennials have nothing. He benefited financially from the millions of $27 donations: his wife derived a juicy salary as campaign manager paid from it. Everybody got richer at the top of his campaign HQ…the millennials got the joy and pride of becoming $27 poorer for him.

Sanders is going nowhere but to retirement, he will not be part of anything millennials do from now on; maybe he stays in the Democratic party, maybe not. He didn’t even support progressives down ballot because it was all about him.

But millennials are not going to complain about him (bless their hearts). Why?

Because they know that theirs was a symbiotic relationship with Sanders: they raised him and, in exchange, he paid them with a vivid-dream, a new form of Hope and Change: ‘doing the revolution’. The millennials refused to listen to anyone but beloved Bernie. Anyone who didn’t join them or who dared to ask questions about his political record was immediately cursed and publicly humiliated a la Trump.

And the American Left joined them in the dream because they are political zombies. They have nothing else to do but drawling for the millions of followers Sanders has and trying to drag the youngsters into their lairs: the Green party and any of the assorted decrepit socialist tombs passing for ‘workers party’. (I’m not too fond of the Left any more, does it show?)

The first missed hint that they were being had by Bernie was how quickly Sanders dropped the word “socialist” from his speeches. He made the MSM feel safe to prop him up with free coverage, and leave him unvetted so he could be their attack dog against Hillary Clinton. It was a repeat of what they did in the 2008 primaries, they propped unvetted Obama and attacked Hillary with a painful barrage of misogynistic articles. The word ‘socialist’ is now reserved by the media as an adjective – not an idea -to show how a ‘socialist’ almost defeated evil Hillary.

The second hint at betrayal was how quickly Sanders re-focused his campaign away from attacking the oligarchs towards attacking Hillary Clinton as the evil, powerful witch who has corrupted EVERYBODY; she decided every presidential decision –  Obama’s and Bill’s – with her scary feminist power. Gone were the ‘substantive’ class struggle analysis. It became a campaign to destroy Hillary so Bernie could be the nominee.  Instead of attacking the oligarchs, WS, the pharma, or even Trump, he attacked the DNC as the evil ‘establishment’ controlled by Hillary who has caused all the problems of the world.

Third hint: no talk about creating a third-party or how to ‘do the revolution’. If the DNC is such a corrupt place, the dream of ‘reforming’ it makes no sense. Better start a new workers party from scratch. But Sanders promised the DNC he wouldn’t do that; and the millennials don’t want to hear any criticism of their beloved Leader.

Sanders will talk to his millennials tonite; only then we will know how correct or incorrect my observations about his campaign are. Which way will the millennials go is yet to be seen. They may vote for Trump, but don’t expect them to join any of the American Left’s groups. Hopefully they will create something new to replace the old leftist debris.

Either way, Bernie’s campaign was a majestic run towards the sunset of the gods.

Update: In promoting his new book, Sanders promised in October to be a “thorn” in Hillary’s government. I wouldn’t count on it, it was just for promoting his book. He continues to be part and parcel of the “establishment”.

This “Real Hope” acknowledges they were had by their first populist-charismatic leader. So, they try the same recipe… again .

Let me say something about me: I am not a ‘pure’ democrat; I have voted dem only because there are no viable alternatives to the two-party system. Also, I have been tested in the ‘revolution’ since 1972, having been in the pro-independence movement in Puerto Rico and in the different people’ struggles here in New York City since I moved here in 1982. Thus, I’m speaking as a leftist, not as a member of the democratic party.

When Obama started running in the 2008 democratic primaries, I, like everybody  else, was moved by the possibility that a black man, and a ‘progressive’ at that, had a real chance of making it to the top. But because I had learned not to trust politicians and to research their records instead of taking them for their words, I went and did my research on Obama.

Of course, I was torn because I was also interested in having the first woman running, also with a chance, for the presidency. Her I knew better, most of us did. She was not perfect, but neither has  been any male president of the US.

Soooo, as I started finding reliable info online about Obama not mentioned in the campaign, mostly from interviews he gave,  his appeal to me started to look ‘iffy’, and then things got to the point of ‘oh, no, not you’. The info I found was so damning (in particular his speech at the elitist Hamilton Project think-tank), in my view, that for the first time I opened a blog, me who is not good at English grammar, to share what I had found. The blog is still out there: ‘the obama nightmare’, and so is my grammar. The blog’s title says how bad was what I had found. I will give details at the end of this ‘series’. Let me first present more common-sense material that should have been a clue since day one of their campaign to the left about who these candidates represent.

The Messiah and The  Saint 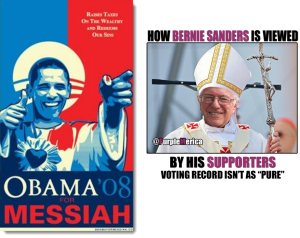 Both of them: through the primaries with no record and not vetted. Implied in a saintly image is the unstated rule that what this saint says is true and should not be questioned. That’s why ‘berniebots’ get enraged when anyone questions Sanders’ record or don’t support him.

Obama’s campaign was imbued, like Sanders’ today, with that air of mysticism. Idealization of these two politicians is an understatement. 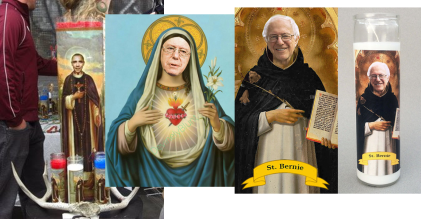 You probably remember that the Obama campaign painted a halo around him. He himself spoke of his ‘movement’ as capable of ‘parting the waters’, figuratively speaking, of course?

Sanders, we see him portrayed as ‘the only one who tells the truth’, he never lies (despite having been a politician since the 1980s), his record in Congress shows (despite it haven’t been vetted by the MSM nor by his followers) shows that he has only supported bills protecting the downtrodden, and he has never received money from the elite (although it comes indirectly). 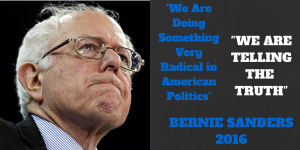 All of this is enough to make anyone a SAINT, which is why his followers adore him and pay obeisance to him. Of course, his recent trip to the Vatican and brief meeting with His Sanctity The Pope solidified that saintly image of Sanders. Now Sanders’ statements are taken as “moral economy” and in tune with the Pope’s. How can you argue against him without coming across as a despicable jerk?

As an experienced leftist, I learned not to follow politicians who gladly promote themselves as above the rest of humanity. When I see one doing it, I know he is not only a fake, but a liar and dangerous for the ’cause’.

There should be nothing more anathema to any leftist worthy of calling himself or herself so, than supporting…

So, a pitch for sainthood was the first clue to me that Obama, as Sanders today, was working for the oligarchs. But here they are, the American left, drinking the sacramental wine, again.

Populist Candidates For the Downtrodden

Obama ran a populist campaign just as Sanders is doing today (and Trump, but that’s another story). Obama was groomed for his role (as discussed in the other blog) and ran knowing from day one that his was going to be a populist campaign. Sanders, however, was caught by surprise; he didn’t expect the success he is having, no one did.  He just wanted to bring the issues important to the angry youngsters so they would come to the party and stop being so angry; seriously.

The point is that after 9/11 the oligarchs came out of the shadows to take direct control of power. They knew that their cut throat capitalism and thievery was going to destabilize the economy and create anger in the working class; that their thievery could not be hidden anymore. So, they needed new politicians, men who were seen as outside the ‘establishment’, populists who would bring the discontented and the oppressed back into the two-party system and neutralize their righteous anger there. That was Obama first, and now Sanders.

What I have just said can not be new for leftists and socialists. We know what the establishment parties do and for whom they work. As for ‘neutralizing’ the anger…many leftists and socialists agree in that it was Obama who killed the anti-war movement, and the Occupy movement too. How he did it? Well, you can’t argue with your saints, especially when they come at you with the police state to throw blessed peppered spray over your head.

Tomorrow, Part Two: Reel them in and Hillary’s ‘Via Dolorosa’

I will get into the details I had found  about  Obama that made me think he was a bad ‘event’ for the left and the working class.