So Trump-the-snake wants to buy Greenland? (In Buddhism, the snake is the symbol of the poisonous personality trait of anger: it bites and poisons the self and the people who becomes the object of our anger and hatred.) Sure we all reacted first with typical dismissiviness of his words.

Nothing that this amoral human being says or does comes out of the blue. Maybe when he was not in the White House we could have dismissed his idea as inconsequential to us. What possible reason could he have had to buy the island other than personal greed, as a real-estate transaction?  But now he commands in his hands the powers of a nation’s politics and economy, and the owners of the nation’s media are  in a behind-the curtains relationship with him. We all know by now that Trump has no other interests than his personal ones; we all know by now that the idea that he is doing any policy (foreign or national) for the benefit of the PEOPLE of the USA is the idea of idiots and/or dishonest right-wingers.

So, please, put the idea that Trump is pursuing some sort of geographical battle with China in your trash can. The only reason he would do that is if he gets big under-the-table checks and stocks from the military vultures for him to approve their arms-and-debt money making interests. He just gave the ‘Pentagon’ a trillion dollars: that’s money for the armament companies CEOs and he gets a chunk of that under the table. What? You think he gives money away for free to anyone, even if it is not his money?

More in keeping with his scum-bag nature is the idea that the elite gods ruling over us are pursuing their dream to acquire, by deceit, islands around the globe because they are afraid the service is growing restless, and it’s time for them to live totally away from the rest of humanity. They must have approached him with the idea of facilitating the grabbing (he loves that) of the island for them. He has been very good at giving them what they want. So don’t go on thinking that this is just another instance of Trump idiocy. Really, the only ‘idiots’ here are the people who keep thinking he is an idiot.

PUERTOPIANS and the Libertarians’ Utopia

For at least the last 30 years the billionaire class (tech companies CEOs, cryptocurrency, Wall Street CEOs, casinos moguls, among others) has been running out of land on which to walk without bumping into the service – the rest of us, i.e. How many times have you bumped into, let’s say, Jeff Bezos while buying your groceries at Whole Food; or seen him searching for his seat in a movie theater, or waiting in line to eat at the trendiest new restaurant in your area? The chances of you bumping into any of them is basically zero, nada.

These men relate to us as gods; they are way up there in their castles, they don’t move around near the rest of us. They DON’T want to be around us, we are to them only a wallet: we carry the money they take from our pockets every day without us complaining. You don’t seriously complain to god, do you? Your relation to god, if any, is one of submissiveness. Your relation to the billionaire class is also one of submissiveness.

So for many years they have been looking for real estate to plant their castles away from us, own them so that we can’t go near them. They have discovered Puerto Rico as their newest possible paradise. I give you a few links for you to corroborate this.

The Battle for Paradise

Silicon Valley Is Letting Go of Its Techie Island Fantasies

Trump’s interest in Greenland is the interest of the billionaire class looking for their own paradise. They want the moon, literally, to plant themselves there away from us.

So really, the talk about Greenland is not about problems with China. It’s about grabbing paradise and evicting everyone else from it, just as God did to the two losers who followed the snake.

There’s a lesson for you to learn, people. 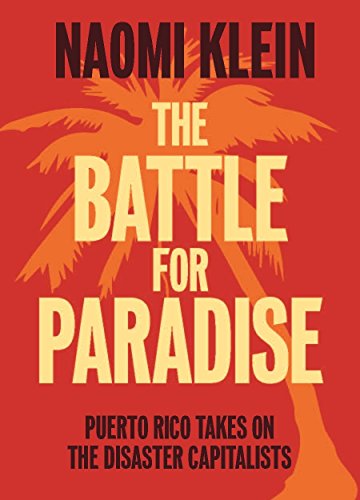 You HAVE to read this book.