OK. Henry James didn’t set out to write a  ‘manual on how to vilify a woman’. He self-reported that he was just, basically, screwing with his readers’ mind; he called his work “a jeu d’esprit”.

But answer this in your own beautiful mind: what is the link between seeing ghosts and women’ sexuality?

That’s what most literature critics and psychologists of culture think Henry James’s groovy novella, ‘The turn of the screw’, is all about.

Gorgeous Deborah Kerr as ‘the governess’ with creepy ‘Miles’ in ‘The Innocents’, 1961 film version of ‘The turn of the screw’. Screenplay by Truman Capote and William Archibald. A must see classic. But, only the governess as a mad woman is presented in the movie. None of the other elements author Henry James referred to were used in the movie,

If you haven’t read it yet, I recommend you do it; you won’t regret it. Be aware that  I’m giving its whole enchilada here.

I read the story which means that I have first hand knowledge of it. This business of having ‘first hand knowledge’ of something is an important element of the story. I will show to you why this novella serves as an example of how character assassination, particularly women’s, is produced as matter of fact in our culture.

Also, conceit aside, I think my analysis is better than ‘the governess was an hysteric’ analysis.

[Take note of the two badges on the right of this column.]

The only way I understand

What is the story about?

People see what they want to see.

It’s a ghost story. Of course it is also about women’s sexuality (based on one fictional woman).

For 120 years (the novella was published in 1898) just about every analysis of the story is focused on the main female character’s sexuality. Did the governess see the apparitions because she was an hysteric? Or because women, more than men, are prone to faulty reasoning that leads them into seeing what is not there? Or did the incident really happen?

Maybe  the reason for such an obsession with Freudian analysis has something to do with the fact stated by one listener in the introduction when told that the “story won’t tell in any literal, vulgar way” who the governess was in love with:

‘More’s the pity then. That’s the only way I ever understand.”

That was Henry James passing judgment on his readers.

He knew his readers well. He has kept them for 120 years passing judgment on the poor governess’ sexuality and mental health based on the story told in the novella by a man (the anonymous narrator) about whom he intentionally tells the reader absolutely nothing. Mr. James played on the readers’ innate capacity to ignore the obvious.

There is universal agreement between literature critics in that the author intentionally left the ending of the story ambiguously enough as to let the readers decide, based on his clues, whether the incidents narrated really happened.

To make that decision readers need KNOWLEDGE of facts, knowledge being the main issue of the story: how do you know anything? And yet the author chose to deprive the readers of any conclusive knowledge about the characters in the story. Our literature professors and psychologists prefer to ignore this fact and instead they focus on the governess’ sexuality as if what they read about her is TRUE, accepted as described by an anonymous ‘reporter’.

Critics never question the ANONYMOUS narrator or his intentions., not even how did he get his information. Surprise, surprise; it was all in HIS head.

How do we know anything?

Of course there were other themes in the story.

From beginning to end of the story, there are three constant themes openly discussed by the main characters – the governess, Mrs. Grose, and Miles,  but ignored by just about every critic of the story, and which I discuss below:

People see what they want to see, 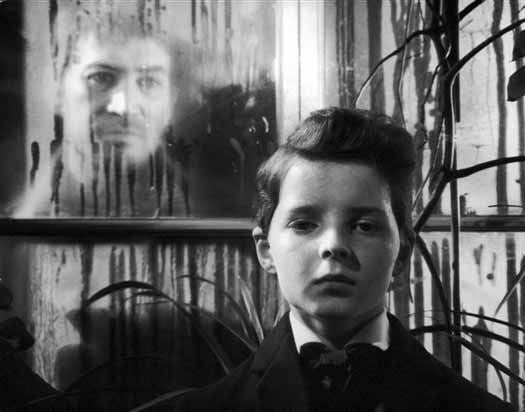 Let me start at the beginning.

This is a story about how to tell  a good ghost story – Mr. James said so. But the inevitable question, stated or unstated, at the outset of ANY ghost story is:

Do YOU believe in ghosts?

Do you believe in ghosts? Yes or no?

That question is inevitably followed by a second implied question, the one stated throughout the story by each main character at least once:

There are three sources of knowledge, at least as agreed by philosophers (and Henry James was a philosopher),  of which their reliability has been in question since humans learned to use their thumb:

Personal acquaintance with the object through direct sensual perception,
knowledge by inference (object is absent, only its marks are perceived), and
knowledge from information given to you by others.

Henry James makes use of these three sources in the story to guide you, no, to misguide you into the thicket of the story. This brings me to the introduction, where Mr. James starts the word-game that keeps the reader going back and forth to unscrew him/herself from the mystery.

The mother of all clues: Hello? Who’s talking to me?

This is where Henry James shows why he is the master.

If one source of knowledge is the words, the testimony given by another person, then that person’s character, his/her trust-worthiness must matter to the listener, wouldn’t you agree? Would you take the statements of a known liar and criminal at face value?

Henry James gives us the first clue of the story in the introduction, in what, interestingly enough, the anonymous narrator calls

“the proper prologue required for an intelligent understanding of the narrative”.

And what is that?

One important fact ignored and seldom mentioned by critics is that the story is not, as most readers assume, being told by Douglas, the purported story-teller. Henry James intentionally feeds this information to the reader in the introduction. The story and all the facts about it are given to the reader by the unknown narrator, a person no one knows, not the people at the meeting or the reader; and given from his old memories to boot.

This is the anonymous narrator talking to the reader:

“…the narrative he had promised to read us…Let me say here distinctly, have done with, that this narrative, from an exact transcript of my own made much later, is what I shall presently give.”

“Have done with” as in ‘let me get it out-of-the-way before you start asking me the relevant questions: I don’t know the facts first hand or otherwise, I can’t know the truth’.

The author must have had a reason to put this clarification there. The readers can’t say that he didn’t warn them about how to treat the facts given to them by the anonymous narrator.  No one today would accept the ‘evidence’ provided by this man if one’s life depended on getting the ‘true facts’.

Only Douglas knew him, but not when the meeting took place, which begs the question why did the anonymous narrator believed him at that time?

The “narrative”, the story itself, is told from the anonymous narrator’s old memories about what happened at the meeting where Douglas supposedly read from the original manuscript, also supposedly written by the governess. The narrator tells us that Douglas denied having personal knowledge of the facts and events he was about to read from the governess’ manuscript. Douglas knows only what the now dead governess told him.

This means that no one telling the story knows the facts first hand, it’s all ‘she said’, but the reader is to pass judgment on whether the story is true or not, on whether there were apparitions or on whether the governess was mentally ill or not, based solely on the old memories of an unknown person of whose character and trustworthiness we have not a shred of evidence to rely on.

Flora, the girl, seems to be able to see the apparition but denies she did.

Does it matter today, or has it ever mattered, that scholars and psychologists continue to pass conclusive and ‘professional’ judgement on a fictional woman’s sexuality, and extrapolate that judgment to real women, based on the intentional lies of a genius fiction writer? Or is it the other way around, they bring their prejudices about women in general and use the fictional woman to validate their prejudices?

But, did it happen?

More important than whether it all happened or not is WHY DID IT HAPPEN? Why was the governess alone in a mansion with six “respectable SERVANTS” and two children abandoned by their wealthy relatives? The servants are “respectable”, says the master-boss, but we don’t know that., do we? Why must he readers believe him, especially when they are given clues that the servants were NOT all very “respectable” at all?

Either way what we have with ‘The turn of the screw’ is a work of literature art used by literature critics and psychologists to cement a cultural negative stereotype of women in general, and their  sexuality in particular. This despite the fact that the author did not set out to write about women’ sexuality, although the governess’ sexuality was one among the many elements.The cultural verdict is that the governess is a crazed sexually repressed woman driving the children mad and to death. Ignored are the other elements:

-That at the master who hired the governess neglected the children when, it is hinted, he knew they were in danger with the previous ‘servants’ but abandoned them and refuses to be in contact with them. Miles is marked by this neglect, as the author let us know in one scene.

-That wealthy men do not want to be bothered with raising or protecting children, even those of their own dead relatives. This is established clearly at the beginning of the story itself, second part. He orders the governess not to inform him of ANYTHING related to the children; he basically gives them away to any woman willing to be paid well for the job of taking care of them. But never do we hear about this by critics. it’s all about the crazy woman.

-That something was going on at the Bly mansion. Other women interviewed for the job refused to take it because they were ‘scared’ of what the master described.

All of these elements are totally ignored by every professional literature critic and psychologist using literature to spread their judgments on women.

Henry James stated that his intention was to write a story to confuse his readers, to play with their minds, so to speak. He wanted to write the best ghost story, not the best study of women’ sexuality. But that’s what literature critics have focused on for over 120 years.

The author kept a link throughout the story between class divisions and the governess attitude towards both  the ‘master’ and Mrs. Grose, the housekeeper. The master gave her “supreme authority” over Bly and the children, the first time this young woman was given any power over anything. There’s a reason why Mr. James put that in there.

But that power over the children was TEMPORARY because Miles in particular was growing up and recognizing his place of superiority in society. And the governess was aware that the boy was getting ‘naughty’ with her because ‘he could’. She knew her power over him was temporary and coming to an end. I’m sure the author wanted us to think about that.

Does any literature critic and psychologist care or have noticed?

I will continue the discussion about how Henry James presented women’s loss of power next week.