For the last two weeks, pseudo-Marxist Counter Punch magazine has published not one article by women.

Now, don’t you go on thinking it’s a serendipitous event. And before anyone raises the misogynistic argument that Counter Punch doesn’t engage in Affirmative Action for women, consider the following.

The ‘left’ has declared a war on ALL women movements. You can read on this blog some instances of misogyny exploding on online ‘leftists’ magazines like a pimple on a teenager’s face.

From bashing the Women’s March on Washington D.C. for committing the crime of being openly anti-Trump, to officially branding the #metoo movement as “right-wing”, the men on the ‘left’ completely identify with the fear of that king of misogyny, Trump, that women are out to attack men.

One of the sorriest recent example of men identifying with Trump was Kanye’s cooing for Trump.

Not all men are identifying with Trump, but the many (or few?) who do come from all walks of life: blacks, Latinos, poor, wealthy, white, educated, uneducated, scientists, entertainers… 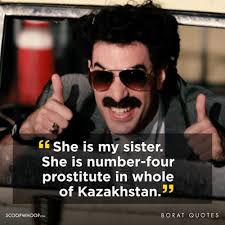 That’s so funny I even had to go and stick some needles on a Borat look-alike doll’s genitals.

So the saga of the pseudo-leftsists’s turn to unite with the misogynistic right-wing continues.

I’ll try to keep you posted.